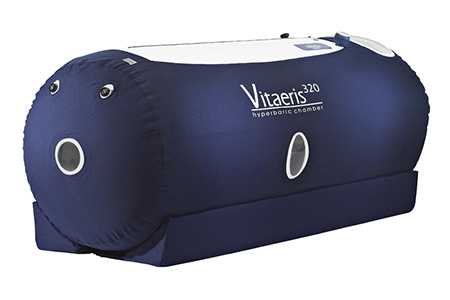 During Hyperbaric Oxygen Therapy (HBOT) the patient breathes in oxygen at levels greater than typically found in room air. An HBOT session, which takes place within an environment of increased pressure, can be a safe, effective treatment for many types of medical conditions. Our practice utilizes Mild Hyperbaric Oxygen Therapy (mHBOT), a portable, soft-sided hyperbaric chamber that uses lower pressure than traditional HBOT treatments. Because HBOT is most well-known for its use in treating SCUBA divers suffering from decompression sickness (“the Bends”), an HBOT session is commonly referred to as a “dive.”

The medical basis of HBOT is based on the laws of physics. “Henry’s Law,” says that the amount of a gas dissolved in a liquid is in proportion to the pressure of the gas above the liquid, provided that no chemical action occurs. “Boyle’s Law” states that at a constant temperature, the volume and the pressure of a gas are inversely proportional. In other words, gas will compress proportionately to the amount of pressure exerted on it. An example of these laws would be found in a sealed bottle of carbonated beverage. Until the bottle has been opened, the gas bubbles are dissolved in the fluid. Once the bottle has been opened, the pressure is released, and the gas is no longer dissolved in the liquid (as seen by the formation of bubbles).

At room pressure, almost all oxygen that we breathe is transported in the red blood cells. When a patient is treated with Hyperbaric Oxygen Therapy, the oxygen can dissolve in the patient’s serum (the part of the bloodstream that is fluid, not blood cells). The result of using HBOT is that more life-sustaining oxygen is delivered to the tissues and organs. Also, due to the effects of HBOT, blood vessels are opened up, so more blood flows to these areas. This can bring more nutrients to the cells, and theoretically may facilitate greater removal of toxins that accumulate in the organs.

The FDA has approved HBOT for the following medical conditions:

Medical Research has also shown HBOT may be helpful for treating other conditions, including (but are not limited to):

The FDA has not evaluated the use of HBOT for these conditions.